We all have seen unprecedented turbulences across markets in the first half of the year 2022 that continued throughout the third quarter of 2022. War in the Ukraine, accelerating inflation in Europe and the US, rising interest rate and depreciation of foreign currencies in countries where we operate were the most critical events having impact on the economy and our operations.

Despite these macroeconomic challenges we have achieved construction progress on all our development sites, particularly Forest Tower, which has reached its completion in March 2022, as well as projects Nove Apollo and Varso Tower, the latter one having been completed in July 2022.

Thanks to construction accomplishments as well as commercialisation of previously completed projects we were able to generate revaluation gain on our investment property of almost €90 million. Fair value of our income producing portfolio has more than doubled as five projects have been finalised since June 2021. As such, net operating income from investment property increased considerably to €35.6 million and contributed positively, along with revaluation gain, to achieving net profit for the period of €36.2 million. Moreover, leasing contracts with annual passing rent over €15 million have been signed in the first half of the year 2022 which shall reflect in future rental income.

On the other hand, interest expense and foreign exchange losses caused a decrease in net profit. Interest expense for the first half of 2022 increased by €8.6 million compared to prior half year, however the increase was in line with the growth of total indebtedness. Weakening of currencies of the countries where we operate (mainly GBP, HUF and PLN against EUR) led to foreign exchange rate loss of EUR 63 million.

In terms of the balance sheet strength, the company ended the first half of the year 2022 with almost €200 million cash balance, total assets of €4.12 billion and NAV of €1,883 million. HB Reavis increased its level of debt to €2.04 billion with gross debt leverage of 49.6% which was below group’s covenant levels. Temporarily increased debt leverage was expected due to increased share of income producing assets (with higher leverage) on total assets and their intended separation into a new structure which was announced earlier this year.

Marcel Sedlak and Steven Skinner have been appointed to the Executive Management. Prior to the promotion Marcel has held the position of the country CEO in Germany and in his new role will oversee primarily our commercialization activities. Marcel’s previous role has been taken over by Robert Kubinsky who will be country CEO in Germany and is transiting to Berlin from Hungary. Steven will supervise the area of product development and design for all the countries where HB Reavis operates and will continue with his responsibilities as CEO for the UK market.

The current composition of the Executive Management and Senior Management will allow us to deliver ambitious goals thanks to the expertise and knowledge of its members, who bring direct experience from Poland, Germany and the UK, where the company focuses its efforts.

We have expanded our presence in Berlin, Germany by having successfully completed the two acquisitions. We have also managed to strengthen our pipeline in Warsaw, Poland as we have entered into a joint venture arrangement to develop a new project Port Praski.

Our buildings continued to attract interest from various tenants. During the third quarter of 2022 we have managed to lease more than 14 400 sq m of GLA. Overall, we have signed close to 74 500 sq m of GLA in the first three quarters of 2022 with annual passing rent of over €18 million.

HB Reavis has reached a big milestone in July 2022, when Varso Tower, the tallest building in the EU, has been completed with its first tenants moving in in September 2022. Its quality was recognised by independent BREEAM and WELL auditors, who certified the building as Outstanding and Gold, respectively. Varso Tower is the final showpiece of our award-winning Varso Place, a mixed-use development offering offices, a hotel, an innovation hub and retail options. For more information on Varso Tower completion click here. 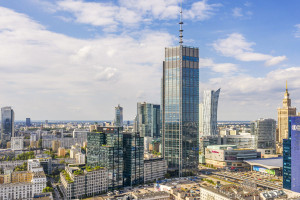 During the third quarter of 2022, HB Reavis has drawn down total of €132.6 million of external bank loan financing, of which €81.5 million was linked to acquisition of the two projects in Berlin.

Regarding capital markets presence, we have been active especially on Slovak capital markets as we have managed to issue a new tranche of €46.16 million bonds maturing in 2027.

Our bonds buyback programmes in Slovakia and Czechia continued during the third quarter and should continue in the fourth quarter as well.

At the end of the quarter, the Group had €1.835 billion of outstanding bank financing along with €362.8 million of bond financing.

As previously announced, we have decided to divest Lodz plot in Poland. The transaction is still pending and is expected to be finalised later this year.

As of the end of the third quarter, the Group held an income producing portfolio of 11 office and 1 retail properties with a total GLA of 547 thousand sq m across five countries with annual operating income at full occupancy of €137 million. The portfolio includes the following projects:

The market value of the portfolio reached €2.55 billion as of 30 June 2022 based on independent valuations.

Projects currently in the phase of construction account for 69 thousand sq m of future GLA in two buildings and estimated future gross development value of around €459 million spread across two capital cities:

We are proud to announce, that we have received the award for the Office Developer of the Year in Central and Eastern Europe at Eurobuild CEE Awards gala in Warsaw, Poland. We are proud to be at the forefront of the evolution of work spaces and services that make office work better, healthier and more efficient, which was appreciated by the Eurobuild Awards jury.

Our staple projects have achieved some awards for us, too. Varso Tower has won the Office building of the year in Prime Property Prize gala in Warsaw and we have been recognised as ASB developer of the year in the retail segment for our Nivy Mall project in Bratislava.

NOT FOR PUBLICATION, DISTRIBUTION OR RELEASE, DIRECTLY OR INDIRECTLY, IN WHOLE OR IN PART, IN OR INTO THE UNITED STATES, AUSTRALIA, CANADA, JAPAN OR ANY OTHER JURISDICTION IN WHICH OFFERS OR SALES WOULD BE PROHIBITED BY LAW. THIS PRESS RELEASE CONTAINS INSIDE INFORMATION FOR THE PURPOSES OF THE MARKET ABUSE REGULATION. THIS PRESS RELEASE AND THE INFORMATION CONTAINED HEREIN IS FOR INFORMATION PURPOSES ONLY AND DOES NOT CONSTITUTE OR FORM PART OF ANY OFFER OF, OR THE SOLICITATION OF AN OFFER TO ACQUIRE OR DISPOSE OF SECURITIES IN ANY JURISDICTION, INCLUDING IN OR INTO THE UNITED STATES, CANADA, JAPAN OR AUSTRALIA.

This announcement contains or may contain forward looking statements regarding the Company and its subsidiaries and its future business. Such statements are not historical facts and may include opinions and expectations about management confidence and strategies as well as details of management’s expectations of new and existing programs, technology and market conditions. Although the Company believe their opinions and expectations are based on reasonable assumptions, these forward-looking statements are subject to numerous risks and uncertainties, not all of which will be exhaustively explored in this announcement or elsewhere. Accordingly, the recipients should not regard such statements as representations as to whether such anticipated events will occur nor that expected objectives will be achieved. The recipients are reminded that all forward-looking statements in this announcement are made as of the date hereof and for the avoidance of doubt the Company does not undertake to update any such statement made to reflect events or circumstances after the date hereof or to reflect the occurrence of unanticipated events. For the avoidance of doubt, the Company does not accept any liability in respect of any such forward-looking statements.