HB Reavis has hereby published its Quarterly Business Update for three months ended on 30th of June 2021. You may read the full report below, or download in pdf here.

Once a year, the strongest real estate names meet at Real Estate Brand Awards gala and await their name to be announced as a winner. This year it was HB Reavis that topped the rankings and achieved the award for the strongest office developer brand. The focus of this year’s award edition was aimed at employer branding, ESG, and digital marketing leadership. 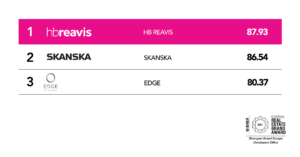 No acquisitions were finalized in this period. We are in advanced stage of negotiations on central Berlin development opportunity.

HB Reavis has launched acquisition process for the project New Apollo, which was held by the Group previously. The project, which is currently under construction, is situated in the Bratislava’s central business district and is set to accommodate tenants in over 53.5k sq m of GLA. The project is expected to open in 2023 and will include almost 500 parking spaces with a large bicycle hub. In terms of its environmental consciousness, and in line with the HB Reavis criteria, the building is targeted at BREEAM Excellent certification level. HB Reavis is currently carrying out development of the site as a development manager and general contractor.

Our leasing activity in the second quarter of the year was marked by two large transactions.

Firstly, we have signed a large multinational IT company, IBM, to be an anchor tenant at New Apollo with more than 30k sq m of GLA. Our smart technology platform Symbiosy, facility management services by More, and flexible leasing by Qubes will all be part of IBM’s experience at New Apollo.

home24, a growing international e-commerce platform, has secured almost 13k sq m of GLA in our DSTRCT.Berlin development, which will soon open its doors to first tenants. The total leased area consists of 12k sq m of office area, more than 1k sq m of terraces, including 250 racks in the bicycle garage. The company partnered with our Origameo team, who will carefully tailor the design and usability of the office space to reflect the needs of home24 and its employees.

The above-mentioned leasing successes together with our strong performance during the first quarter of the year has ensured that our leasing performance for the first half of the year 2021 is almost twice as large in terms of GLA leased as the entirety of the year 2020. The interest towards spaces in our projects as well as the rebounding leasing market is further underlined by project Bloom Clerkenwell, where two thirds of the building are currently under offer.

Overall, there has been 46.6k sq m of GLA signed (incl. renewals) during the second quarter of 2021, primarily attributable to IBM, home24 as well as office client in Agora Hub. This brings the total area leased during the first half of 2021 to 59.4k sq m with an annual passing rent of €11.9 million.

All of our projects, totaling 288.9k sq m of GLA, which are currently under construction are taking noticeable steps towards their completion. The underground central bus station as well as the retail shopping center at Nivy Station are both being finalized with expected opening in autumn this year. The construction on DSTRCT.Berlin is reaching practical completion and premises are expected to be handed over to STRATO by the end of summer. The project is set to quickly become a buzzing professional and social hub for Berlin’s Prenzlauer Berg district.  Our over-site development located at Farringdon West, Bloom Clerkenwell, is close to its practical completion and is currently undergoing finishing touches before its opening to first tenants. The building has attracted interest for multiple prospective tenants which resulted in two thirds of the building being under offer. Our developments in Warsaw, Varso Tower and Forest Tower, are progressing well and are on their way to be finalized at the beginning of next year.

As part of our activity on capital markets we have established a new bond programme in Slovakia of up to €120 million and successfully issued first €10 million tranche. The second quarter was also marked by the planned repayment of the first tranche on our Polish issuance in the amount of 100 million PLN (€23.3 million).

During the second quarter of 2021, HB Reavis has drawn down a total of €124.6 million of external debt financing, out of which €114.6 million was primarily linked to properties currently under construction and general corporate purposes, and €10 million was drawn in form of issued bonds.

As of the end of the last quarter, the Group held a portfolio of 10 income producing office properties with a total of 270.4k sq m across three countries with passing rent of €58.7 million. The portfolio includes the following projects:

The overall market value of the portfolio totaled up to €1.0 billion as of 30th June 2021 based on management estimates, while the weighted average occupancy across the portfolio was 77% at the end of the last business quarter.

Projects currently in the phase of construction (or demolition) account for 288.9k sq m of future GLA and estimated future gross development value of around €1.7 billion as of 30th June 2021 based on management estimates, all spread over four capital cities: