Peter Pecník, Group CFO, comments on the financial results and the current situation:

“For all of us, 2020 meant an unprecedented change and a wave of challenges in our private and business lives, caused by the eruption and continuation of Covid-19 pandemic. Consequently, our business and financial performance in 2020 was negatively affected by the profound impact of the pandemic and disruption it caused. Many governments have imposed lockdowns and closed borders which resulted in slowdown of our construction and leasing activities. Yet, despite these challenging circumstances, we have been able to generate positive revaluation gain of €28.7 million for the year 2020, mostly as a result of construction accomplishments such as completion of five projects with a total GDV of €840 million, progress in obtaining planning permits and further commercialization of recently completed projects. The revaluation gain together with €27.8 million net rental income had biggest positive contribution on the slightly negative business performance of (€8.4) million of operating loss.

On the other hand, the biggest negative impact on the total comprehensive loss of (€183.8) million for the year 2020 was caused by depreciation of all four currencies on markets where HB Reavis operates against its presentation currency – EUR.  This foreign exchange conversion had a total negative impact of (€124.4) million, including the cost of our hedging operations. The majority (85%) of the currency impact originates in Poland, Hungary, and Czech Republic where entities use local currency for accounting purposes, despite the fact that business transactions are carried out in EUR (leasing contracts, debt service payments, etc.). Therefore, it is likely that such losses are only temporary and would not be realized if commercial terms continue to be agreed in EUR, in line with long-term market practice. The remaining 15% of the 2020 currency was related to GBP depreciation. We have already witnessed opposite trend in EUR/GBP exchange rate from start of 2021 that may offset previous losses.

The overall negative performance in 2020 was therefore mostly impacted by events outside of our control which could reverse in the future. Despite that, we ended the year with strong liquidity of €192.7 million cash and cash equivalents and no significant debt maturities in 2021 outside of bonds issued in Czech Republic and Poland that have already been repaid out of new issuance proceeds received in 2021. Gross debt leverage ratio increased slightly to 44.7% but still considerably below the 55% group’s covenant level and still within the limits of Group’s financial policy.”

Operating profit/(loss) of (€8.4) million in 2020 vs €486.8 million for the year 2019 was mainly impacted by drivers of the revaluation gain of €28.7 million which could be divided between assets that had positive contribution and those that contributed negatively:

Balance sheet expanded slightly at the end of period to total assets of €3.10 billion compared to the previous year of €3.04 billion as a result of increased liquidity and borrowings that have been drawn mainly as part of precautionary measures. As a result, we ended the year with strong liquidity of €192.7 million as measured by cash and cash equivalents and slightly higher gross debt leverage of 44.7% compared to previous year of 36.4%.

Marcin Klammer has been appointed as a new CEO of our Polish operations and, starting in May 2021, will oversee the completion of our flagship projects Varso Tower and Forest Tower as well as the search for new investment opportunities on Polish market. Marcin will build on his vast experience in real estate with background of multiple executive roles in Unibail-Rodamco-Westfield, BNP Paribas, and Arcadis. Peter Pecník, who has held the position for the past two years and oversaw the completion of our projects Varso 1 & 2, Forest Campus as well as the divestment of Postepu 14, took over the role of Group CFO.

No acquisitions were done in this period. We are in advanced stage of negotiations on central Berlin development opportunity.

Our leasing success at the end of the previous quarter was one of the first signals of leasing activity regaining momentum ahead of the anticipated return to the pre-Covid times. The beginning of the year 2021 showed us an increased interest from clients to enter into previously postponed lease negotiations and to secure the vacant premises located in central business districts, some of them materialized in deals worth of tens of thousands square meters of office space signed by large multinational tenants.

In late February, we have signed Huawei for our Agora development in Budapest. The multinational technology company has signed a lease of approximately 8.0 thousand sqm of GLA which will see them occupying space in Agora Tower as well as in Agora Hub.

In addition to the aforementioned leasing success, there has been a considerable increase on viewings for Bloom – our London over-site development in Farringdon, as well as on project DSTRCT in Berlin. In total, there has been 12.8 thousand sqm of GLA signed (incl. renewals) during the first quarter of 2021, primarily attributable to Huawei as well as retail clients on Stanica Nivy and Forest.

HB Reavis has obtained planning consent for its One Waterloo development (formerly known as Elizabeth House) following the finalization of the Section 106 agreement. This milestone follows up on the planning permission granted by Lambeth Council in October 2019 and brings us closer to making this iconic landmark a reality. Located at the heart of South Bank and next to Waterloo Station, the 123,000 sq m multi-purpose scheme will transform the office, retail, and public space into a vibrant neighborhood with design focused on the future of workspace, connectivity, health, and sustainability. 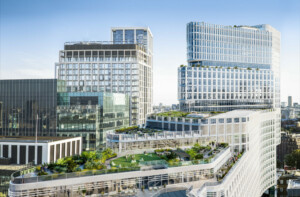 At the beginning of March, we have obtained occupancy permit for the project Forest Campus, which is the first stage of our development on Burakowska street in Warsaw. The building, which will bring approximately 23.7 thousand sq m of GLA is situated at Warsaw’s former industrial zone and is designed in style of university campus with surrounding greenery equivalent to area of two football fields. Forest Campus, Forest Tower, and the public infrastructure on Burakowska street, which will be transformed with wider sidewalks, bicycle path, benches and energy saving lanterns – will all be part of a newly forming urban hub. 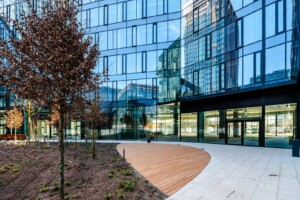 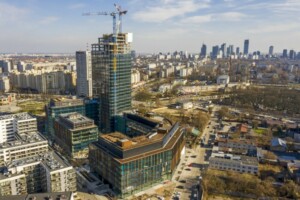 As part of our regular strategic review we explore possibilities how to enrich the development ecosystems we build. Residential development is one of the ways how we can further diversify our operations while maximizing the potential of our pipeline. The area centered around Nove Nivy Zone in Bratislava, and specifically the plot of the temporary business station, is the most suitable place where we can naturally incorporate human-centric residential development in line with the Twin City development with particular focus on the residents, greenery, and the wider public realm. There are currently no plans for residential development on the other markets where we operate.

The over-site development in Farringdon is nearing its practical completion in the second quarter of this year. The project will bring 145,000 sq ft of office, retail, and amenity space to an area where three Underground lines cross with Thameslink and new Elizabeth line. In addition to the vast commercial space, Bloom offers 15,400 sq ft of gardens, 243 bike & scooter spaces, as well as 1,200 sq ft multi-function fitness studio. All these features are designed with the highest human-centered and environmental standards – BREEAM Outstanding, WELL Platinum, and WiredScore Platinum.

The Group has continued its active presence on both domestic and international capital markets. As indicated at the end of the previous quarter, HB Reavis has completed issuance of CZK 1.49 billion (€57.2 million) with maturity in early 2025. Simultaneously, the Group has successfully repaid CZK 1.25 billion (€48.0 million) issuance with maturity at the start of the year 2021. As part of the established bond programme on Slovak market, the company was able to issue additional two tranches of €10 million and €9.1 million.

During the first quarter of 2021, HB Reavis has drawn down a total of €146.5 million of external debt financing, out of which €70.2 million was primarily linked to properties currently under construction and general corporate purposes, and €76.3 million was drawn in form of issued bonds.

HB Reavis has divested H Business Centrum, one of its non-core assets, where it held 50% ownership as a JV partner. The carrying value of the shares as at 31st December was €2.3 million.

Our Symbiosy, Origameo, and More teams have increased their focus to help with our clients’ transition back to the office alongside their third-party technical solutions, workspace advisory and facility management activities. The demand for these services has experienced a rebound and saw our WaaS product lines sign deals with large multinational clients from banking, tech, and consulting. One of our tenants in Varso Place, Yves Rocher, has recently moved into new offices which were co-designed by our workspace advisory platform Origameo. The resulting space translates Yves Rocher’s DNA into workspace which combines natural elements with stimulating aspects that support the achievement of company’s goals. 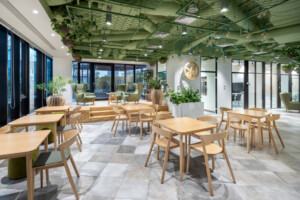 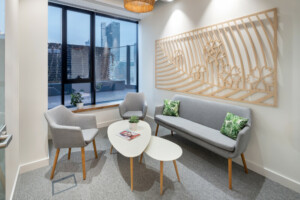 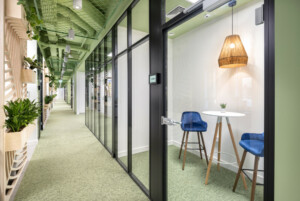 As of the end of the last quarter, the Group held a portfolio of 11 income producing office properties with a total of 270.4 thousand sq. m across three countries with passing rent of €58.7 million. The portfolio includes the following projects:

The overall market value of the portfolio totaled up to €0.9 billion as of 31st December 2020, while the weighted average occupancy across the portfolio was 77% at the end of the last business quarter.

Projects currently in the phase of construction (or demolition) account for 288.9 thousand sq. m of future GLA and estimated future gross development value of around €1.6 billion, all spread over four capital cities: