Varso Place has made it into an international series by National Geographic! Cosy up indoors when it airs in the UK on 15th December.

Europe is full of hidden natural gems, unique creations of the human mind and incredible traditions that we’re often not aware of. Now you can discover them with National Geographic’s new TV series “Europe From Above”. The series premieres with an entire episode about Poland – which proudly features our Varso Place project.

With Varso Place appearing on 13th and 15th December, be sure to tune in to see how the project looks from above. Seen from such a height (and from ground level too), the scale of our project in Warsaw’s city centre is quite impressive.

In addition to Varso Place, Europe From Above will also feature the spectacular launch of a ship at Gdansk Shipyard; the Malbork Castle, the largest medieval building in Europe; the relaxing snowscape of the Bialowieza Forest, and even a skijoring tournament!

The show will also offer a brand-new look at Europe – the upcoming episodes will also take you on a journey to Italy, the Netherlands, Germany, land on home turf in the UK and Spain.

Beginning 5th November at 10pm on the National Geographic channel, Europe From Above is not one to miss! 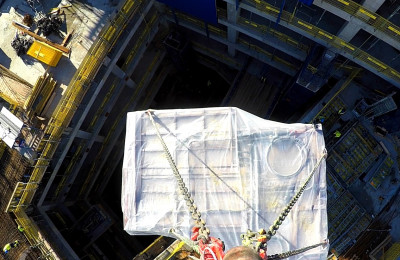 At Varso Place, we like to use technologies to speed up the construction process while ensuring quality and compliance with…

When Varso Tower’s roof topped out at 230m, it became the Poland’s tallest structure. Now though – with the addition…