We continued our efforts towards the completion of our two Berlin acquisitions in Berlin, Germany which are expected to be finalised in the third quarter of 2022. In Warsaw, Poland, we were in advanced stage of negotiations on substantial development opportunity which has been successfully signed in July 2022.

We have announced the name of our second German project, PLTFRM.Berlin, with a commitment to be carbon neutral in operation. The construction start is expected this fall and the project should be completed in early 2025 with around 27,000 sq m of GLA. 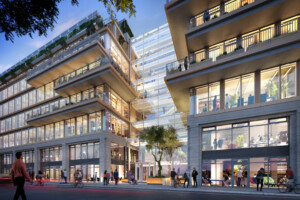 For press release on our new Berlin development click here.

Following the handover of Forest Tower in the first quarter, we focused on progressing the construction of other projects, with Varso Tower reaching final stages of completion in the second quarter and obtaining the occupancy permit in July 2022. Varso Tower, the tallest building in the EU, is now ready to welcome its new tenants.

During the second quarter of 2022, we have managed to draw down €581.0 million of external debt financing of which €363.6 million of existing debt was refinanced, €112.4 million was primarily linked to properties currently under construction and €105.0 million was linked to general corporate purposes and to secure sufficient liquidity that is needed for bond buyback programme in Slovakia and Czechia.

We are especially proud that we have secured a green investment loan from HSBC UK for our Bloom project and thanks to its sustainability credentials including net zero carbon target.

For press release about the green loan click here.

The bond buyback programme in Slovakia and Czechia has been launched in the second quarter and will continue during summer and fall. We are aiming to buy back and exchange bonds in the total aggregate amount up to €169.1 million.

At the end of the quarter, the Group had €1.72 billion of bank financing along with €334.3 million of bond financing outstanding and €101.0 million of committed bank financing to be drawn down, mainly against future capital expenditures on projects Nove Apollo and Worship.

As previously announced, we have decided to divest Lodz plot in Poland. The transaction is still pending and is expected to be finalised later this year.

As of the end of the second quarter, the Group held an income producing portfolio of 10 office and 1 retail properties with a total GLA of 461.0k sq m across five countries with annual operating income at full occupancy of €118 million. The portfolio includes the following projects:

The market value of the portfolio reached €2.05 billion as of 31 December 2021 based on independent valuations.

Projects currently in the phase of construction (or demolition) account for 147.5k sq m of future GLA in four buildings and estimated future gross development value of around €1.11 billion as of 31 December 2021 based on expert valuations, all spread over four capital cities:

At the same time our project DSTRCT.Berlin has been named the “Best New Building” at the ImAwards run by Immobilien Manager magazine in Berlin, Germany.

NOT FOR PUBLICATION, DISTRIBUTION OR RELEASE, DIRECTLY OR INDIRECTLY, IN WHOLE OR IN PART, IN OR INTO THE UNITED STATES, AUSTRALIA, CANADA, JAPAN OR ANY OTHER JURISDICTION IN WHICH OFFERS OR SALES WOULD BE PROHIBITED BY LAW. THIS PRESS RELEASE CONTAINS INSIDE INFORMATION FOR THE PURPOSES OF THE MARKET ABUSE REGULATION. THIS PRESS RELEASE AND THE INFORMATION CONTAINED HEREIN IS FOR INFORMATION PURPOSES ONLY AND DOES NOT CONSTITUTE OR FORM PART OF ANY OFFER OF, OR THE SOLICITATION OF AN OFFER TO ACQUIRE OR DISPOSE OF SECURITIES IN ANY JURISDICTION, INCLUDING IN OR INTO THE UNITED STATES, CANADA, JAPAN OR AUSTRALIA.

This announcement contains or may contain forward looking statements regarding the Company and its subsidiaries and its future business. Such statements are not historical facts and may include opinions and expectations about management confidence and strategies as well as details of management’s expectations of new and existing programs, technology and market conditions. Although the Company believe their opinions and expectations are based on reasonable assumptions, these forward-looking statements are subject to numerous risks and uncertainties, not all of which will be exhaustively explored in this announcement or elsewhere. Accordingly, the recipients should not regard such statements as representations as to whether such anticipated events will occur nor that expected objectives will be achieved. The recipients are reminded that all forward-looking statements in this announcement are made as of the date hereof and for the avoidance of doubt the Company does not undertake to update any such statement made to reflect events or circumstances after the date hereof or to reflect the occurrence of unanticipated events. For the avoidance of doubt, the Company does not accept any liability in respect of any such forward-looking statements.